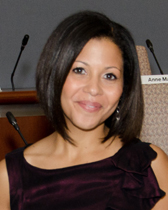 Dr. Debra Thompson is an Associate Professor of Political Science at the University of Oregon, specializing in race and ethnic politics. A political scientist with strong interdisciplinary orientations, Thompson’s teaching and research interests focus on the relationships among race, the state, and public policy in comparative context. Before coming to the University of Oregon, Dr. Thompson taught at Northwestern University and Ohio University, and held a SSHRC postdoctoral fellowship with the Center for American Political Studies at Harvard University in 2010-2011.

Dr. Thompson’s book, The Schematic State: Race, Transnationalism, and the Politics of the Census (Cambridge University Press, 2016) is a study of the political development of racial classifications on the national censuses of the United States, Canada, and Great Britain. The book maps the changing nature of the census from an instrument historically used to manage and control racialized populations to its contemporary purpose as an important source of statistical information, employed for egalitarian ends. Ultimately, this research exposes race-making as a process marred by contradiction and demonstrates that the primary goal of the schematic state is to make the population legible, turning the fluid and politically contested substance of race into stable, identifiable categories to be used as the basis of law and policy. The Schematic State received the Race and Ethnic Politics Section of the American Political Science Association’s best book award in race and comparative politics and an honorable mention from the American Political Science Association’s International Politics and History Section.

Dr. Thompson is currently working on two additional book projects. The first explores the Black Lives Matter movement through the lens of American exceptionalism. The book analyzes the global appeal of Black Lives Matter, including how the current framing of police brutality as exclusively American obscures the transnational dynamics of racial domination and anti-racist activism, as well as the ways that the structure of political institutions can facilitate and intensify the institutional racism of the criminal justice system. The second project, co-authored with Keith Banting of Queen’s University, explores the puzzling persistence of racial inequality in Canada, which continues despite a social safety net and model of diversity governance that many assume is far more robust, redistributive, and egalitarian than those that exist in the United States.

2017. “An Exoneration of Black Rage.” South Atlantic Quarterly, Special Issue: After Ferguson, After Baltimore: The Challenge of Black Death and Black Life for Black Political Thought 116(3): 457-481.

2015. “What Lies Beneath: Equality and the Making of Racial Classifications,” Social Philosophy and Policy, Special Issue: Equality and Public Policy 31(2): 114-136.

2013. “Through, Against, and Beyond the Racial State: The Transnational Stratum of Race,” Cambridge Review of International Affairs, Special Issue: Contesting the Global Colour Line: Race, Space, and Imperial Hierarchies, 26(1): 133-151.

2012. “Making (Mixed-)Race: Census Politics and the Emergence of Multiracial Multiculturalism in the United States, Great Britain and Canada.” Ethnic and Racial Studies, Special Issue: Accounting for Racial and Ethnic Diversity 35(8): 1409-1426.

2011. “A Focusing Tragedy: Public Policy and the Establishment of Afrocentric Education in Toronto.” Canadian Journal of Political Science 44(4): 807-828 [with Jennifer Wallner].